Visionary Media Productions (VMP) works with organizations of all sizes, partnering with major corporate brands like Starwood Hotels and Resorts to produce content for both internal and external communications. VMP helped produce “Starwood Pride,” a national project highlighting the efforts of Starwood staff beyond their everyday scope of work. According to Starwood VP of Corporate Communications, VMPs weeklong production of “Rigoberto Estrada” and Palm Springs Westin Adopt-a-Pet program received the most online engagement of any project produced during that cycle of internal productions. VMP worked with senior level staff to ensure each story was articulated accurately and compassionately, helped capture company pride, and enhanced retention efforts. The power of video was on full display as “Starwood Pride” was transmitted through the camera lens time and time again.

Visionary Media Productions has worked with institutions of higher learning like the University of Southern California, to produce content which assisted fundraising efforts.  Moreover, in November 2015, We Are D.C! The History of High School Football in D.C.’s Traditional Public Schools was released. It became evident in debuting this one hour film that sharing a message about athletics in inner cities provided a vehicle to raise funds.

Visionary Media Productions helps news gathering organizations go beyond the surface level story. Not everyone can tell stories of depth and layers. Visionary Media Productions (VMP) specializes in it. VMP partnered with Laurel, Maryland Public Access Television to produce “The Thomas Williams Jr. Story,” about up-and-coming boxer Thomas Williams Jr., who’s father is the only American boxer to ever be jailed for fixing a fight.

Videos for Special Events and Dedications:

VMP produced an in-house team building video for Starwood Hotels as it prepared for a merger with Marriott Hotels. The production was shown to Starwood staff as it prepped for difficult transformative operations. Moreover, “A Gift for Bob” was produced by VMP and chronicled a local high school community as it planned dedication ceremonies to a beloved coach who succumbed to cancer.

VMP has conducted media training sessions with several organizations focusing on sharpening interviewing skills and dealing with a plethora of public relations situations. Training sessions serve to break down fears of public speaking, improve social media awareness, and provides personnel with interview techniques that cast them in a mature and positive light. 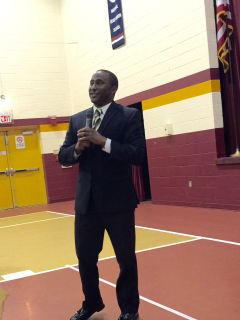 VMP Owner Dave Owens has served as a dynamic guest speaker for many years. His unique background as a collegiate athlete, Naval Academy graduate, University Professor, former military officer and Persian Gulf veteran, make him the perfect guest speaker for any occasion.

Visionary Media Productions produces highlight videos for camps, individuals and teams, as well as practice and game day film coverage. There is no better way to capture your event than video footage/highlight coverage by Visionary Media Productions. VMP captures the technical and human side of your event, and provides a nostalgic/invaluable asset for participants and families to draw on well after your event is concluded.