Blog Blog Scholar-athletes, when interviewing you don't need to know the questions beforehand!

Over the last decade I have spent a lot of time interviewing scholar-athletes before and after games, and often I get asked by interview subjects if I can tell them the questions beforehand so they can prepare answers. I get it. Interviewees, especially those who haven’t done many question/answer segments don’t want to look as if they are unprepared, or unintelligent when answering questions. Furthermore, coaches and administrators don’t want something said that might potentially place the organization or program in a negative light. So I completely understand how getting interview questions from a reporter in advance might serve as a natural calming mechanism for a lot of us. I’m here to tell you, most of the time it isn’t necessary. 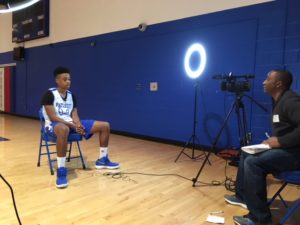 Here’s why. For the most part, scholar-athletes and their coaches should already know what reporters will ask them before and after games. I’ve been a journalist for the last 17 years, and here’s what I’ve found. A reporter covering your game isn’t planning to ask you about quantum physics, or your opinion on global warming. Rather, reporters are going to ask you about your team, your season, why your team was successful, or why it wasn’t. Pretty straight-forward stuff. When a scholar-athlete conducts an interview and it doesn’t go well, it is not because they didn’t have the questions beforehand, rather, it is often a result of a lack of training and preparation.

I have tremendous respect for coaches at all levels, especially high schools. Time is of the essence and the men and women who do it have their hands full with game plans, mentoring, recruiting, and many teach or have other full time jobs. The last thing they have time for is interview prep, which is why I began offering to help with media training a few years ago. 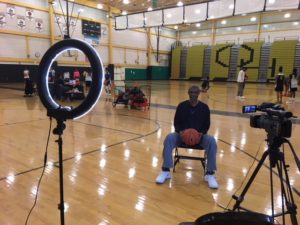 It is crucial to provide scholar-athletes with interview practice scenarios. I mean really practice, just like lifting weights, running sprints, and watching film. Holding mock press conferences in front of classmates, teammates, and strangers forces scholar-athletes to exercise mental dexterity, exhibit courage, and reaps myriad benefits. Less vocal students often realize the importance of voice inflection, while more outgoing, talkative students learn the power of pacing. Everyone learns how to think on their feet, experience discomfort, and work through it. Beyond sports, these skills come in handy when interviewing during college applications, or for jobs. 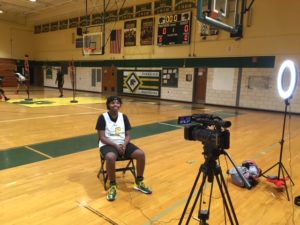 In addition, mock interviews give scholar-athletes the chance to demonstrate maturity in the face of tough situations like losing big games, missing crucial shots, or getting pulled from a game by a coach. These scenarios teach our kids that disappointment in sports isn’t the end of the world, and they have to be able to talk about it. It prepares them for real life.

In my opinion, the adults sometimes do kids a disservice by telling them the media is out to get them, or the media only comes around when bad things happen, or the media has disrespected them by not covering them enough. That line of thinking sometimes leads to a chip-on-shoulder mentality that results in short answers, scowls, and negative body language during interviews. Congrats, your scholar-athlete with that boulder-sized chip on his or her shoulder has just become what some believe many athletes are. Loud, brash, disrespectful, and broodish. Is that an unfair generalization? Of course it is, but that thought exists amongst some, and we should train scholar-athletes to avoid that trap, and verbalize better than simply “everybody’s disrespecting us.” No they’re not.

As a member of the media I’m willing to admit that there is sometimes bias in journalism, but here’s what adults sometimes forget. Interviews are not about proving people or the media wrong, its about branding your organization from that point forward. Whether your team or school is asked to do one interview or 100, it doesn’t matter. Coaches and scholar-athletes have a finite period to brand what they and their organization is all about. Don’t waste that interview time addressing petty biases or perceived slights. 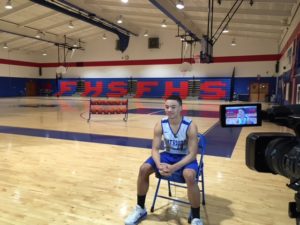 When I train with coaches and scholar-athletes I encourage them to embrace the challenge of the interview. The agenda of the person asking you questions (even if you think the question is unfair or biased) should never impact how coolly, calmly, and collectively you answer the question.

I was once in a press conference before a Georgetown Hoyas basketball game and a reporter asked former coach John Thompson III (who at the time was under tremendous scrutiny about his team’s early exits from the NCAA Tournament) why he felt he should keep his job. It was a direct, piercing, shot-across-the-bow of a question and the room fell silent. JT3 understanding his position and the importance of projecting professionalism at all times responded (I’m paraphrasing here) that he understood the scrutiny of all high profile positions, and he was going to continue working as hard as he could so that those questions wouldn’t come up in the future, and that’s all he could control.

You could tell JT3 was prepared for the question. If he was angered by it, he didn’t show it. You could also tell he understood the interview wasn’t just about him, it was about the Georgetown basketball brand as a whole. Thompson wasn’t going to allow himself or his program to be viewed as one that couldn’t handle criticism, or couldn’t take the heat. JT3 understood the big picture. Truth is, his teams were struggling to advance in the tournament and the scrutiny was deserved. He answered the question, everybody moved on.

Interview subjects hold the power in the interview process. I say this because reporters can’t write or report something you didn’t say or do. It’s unethical. The person being interviewed determines the tone and tenor of the conversation, not the other way around. Sure, a room full of people looking at you and asking you questions can be unnerving, but those people asking questions are sometimes just as nervous as you are. Reporters can’t make you look defensive, aloof, angry, approachable, or nice. How you look on camera, or how you sound in an interview is on you. So identify what you want your image to be and practice it. Don’t memorize, be conversational, and be honest. Eventually you’ll get it, and the very fact that you’re training on it puts you ahead of the game. When interview situations arise, you’ll be prepared like JT3 was.

Dave Owens is the owner of Visionary Media Productions. Owens also graduated from the United States Naval Academy (’94), is a veteran journalist, and adjunct professor of journalism at the collegiate level.