Character Does Matter. Sounds like a corny catch phrase from a teacher or coach, but there’s substance behind this message, especially when it comes from the Travis Manion Foundation (TMF).

TMF was created by the family of Travis Manion, a graduate of the United States Naval Academy, who gave the ultimate sacrifice for his country. Manion was killed by a sniper during operations in Iraq in 2007.  Manion lived by a credo “If Not Me Then Who.” In other words, he believed that if he didn’t serve his country, or make the world a safer place, then who else would. Manion’s family started a foundation in his honor that supports families of the fallen, and also mentors younger generations to develop leadership and community support skills. The Character Does Matter campaign is a big part of the latter.

I’m proud to be a volunteer member in the Character Does Matter campaign. As part of the effort, we speak to area youth groups about the importance of character, and why it matters. It sometimes begins with groups feeling as if they are there simply to hear another lecture, blah, blah, blah. It quickly develops, however, into a candid personalized discussion on why every person should seriously think about making his or her community a better place. 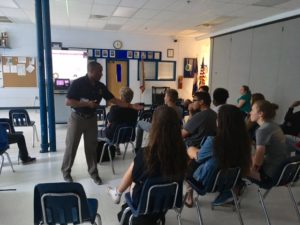 We emphasize the small things. At no point in the discussion do we ever advocate for the military, or suggest that one has to die for his/her country to be considered a difference maker. On the contrary, we tell young people that community clean up efforts matter, donating time to charities matter, standing up against bullying matter. Character Does Matter.

As a fellow Naval Academy graduate, I’m honored to work with TMF. Recently, I was part of an effort at West Potomac High School in Alexandria, Virginia that included a group primarily made up of students who did not speak or understand English fluently. Myself and co-speaker Jim O’Farrell did not think of the potential language barrier as a problem. We relished the opportunity to make connections with, and hammer home important messages to a group that was receptive and appreciative of our time. As language barriers were overcome through an interpreter, it was inspiring to hear stories about students who balanced school, work and taking care of siblings or elderly family members. These were students who truly embodied “if not me then who.”

I will continue to work with more students in the upcoming months, and look forward to passing along this important motto to area youth letting them know that character does matter is not just a corny phrase. It is a way of living that can truly change lives.