The Making of a “Corporate Athlete”

Blog Blog The Making of a “Corporate Athlete”

My two interns this summer are in the midst of quite a process. At Visionary Media Productions, interns don’t just watch, they do! They put hands on equipment, they learn by repetition, and they build confidence through process improvement. 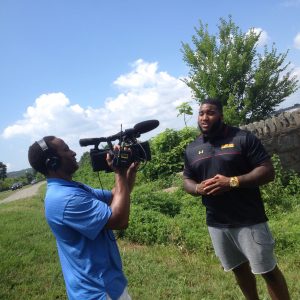 Derwin Gray and Tony Squirewell are both college football players and quality students at their respective universities (Maryland and Bowie State). In my opinion, college athletes are a special breed; young men and women who must juggle academics and high-level athletic competition.

We also know college is a transformative period for most: detachment from home, experimentation, and personality development. Imagine going through that process, while trying to focus on preparing to play a football game against the likes of Michigan State over the weekend. Yikes.

In order to succeed in college athletics, athletes must push themselves mentally and physically to a place few non-athletes can fathom. These frontiers-previously unknown-are uncomfortable and sometimes even scary, yet athletes must carve out real estate in these lonely neighborhoods, and live. I say lonely because athletes must often take the solitary path: workout when others are partying, or study during the summer while others go home and visit friends and family. Athletes also have to study through injury pain. Ever tried to focus on calculus while nursing a hip pointer? It sucks, but this is the life of the successful college athlete. Perseverance!

I believe that same athletic mentality is necessary in the corporate world. What we often require of business managers (in concept), is similar to what we require of the college athlete. The hours are long, the mental stress is enormous, time moves rapidly, your body has to be strong, you have to be a master juggler of multiple things at once, you have to make excruciating sacrifices, and you have be comfortable with the uncomfortable. 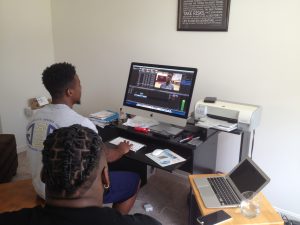 Derwin and Tony are learning how their football lives are correlating to the business world. This past week they both learned new skills; camera operation, editing, and on-the-fly public speaking.

During these exercises, I purposely thrust them into situations that were difficult, awkward, uncomfortable, new, and challenging. Their responses, however, reinforced to me why athletes have special innate skills that are valuable in corporate structure.

Our training on public speaking/reporting involved performing a mock news report in the middle of a crowded place (i.e. Nats Park, Anacostia Park, Elite Skills basketball camps, etc.). I also do this exercise at the University of Maryland where I teach journalism. The process is scary for all young reporter wanna-be’s because they fear random strangers will make fun of them while they’re executing their report. It’s a normal human feeling and it’s also why people in general fear public speaking so much.

Derwin and Tony were nervous as anyone would be, but they demonstrated great courage. Mistakes were made, nervous laughter ensued, and then something fascinating happened. Both reverted to “athlete mode” and became determined to accomplish the goal. I could see it. Both began ignoring the crowds that gathered around them. Both locked in on mission accomplishment. I induced discomfort on purpose and yet both took up real estate in this uncomfortable space and began constructing a foundation of comfort. By the end of the exercise, Derwin and Tony had both voiced a solid first news style “stand up.” It was awkward, excruciating, nerve wracking, and even a little scary. It was also awesome to see them both get the job done despite their fears.

This process is no different than the track athlete overcoming the fear of the dreaded pyramid workout on a hot sweltering afternoon. My track coach used to make us run 100, 200, 300, 400, 600, and 800 meters in succession and then back down from 800 to 100 meters with little rest in between. Anyone who has ever sprinted knows this workout is excruciating. Runners sometimes don’t finish or get sick from exhaustion. It is scary and no one wants to be the weak link.

But all the runners on my team would forge ahead anyway figuring we’d deal with the pain when we felt it. And you know what? We did just that. We dealt with the pain and pushed through it. This is what successful athletes do. When fatigue, or fear, or obstacles push us, we push back.

I applaud Derwin and Tony for their poise and determination under pressure. Whether they become journalists or not is yet to be determined. In my book, however, they’ve already accomplished something more important. They now know how to be comfortable in the uncomfortable space, and realize their athletic skill correlates to more than just athletics. 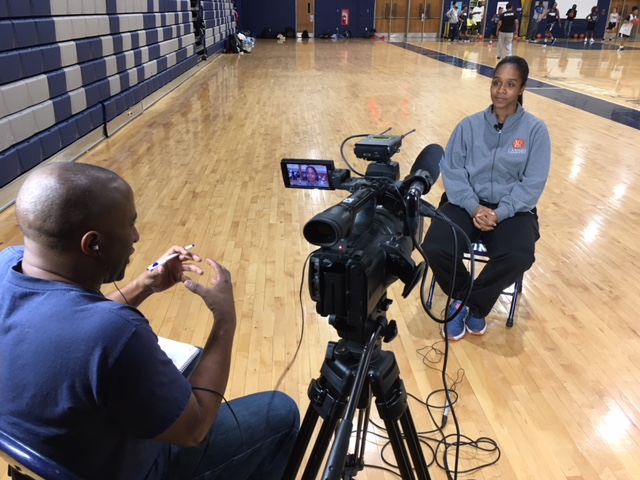